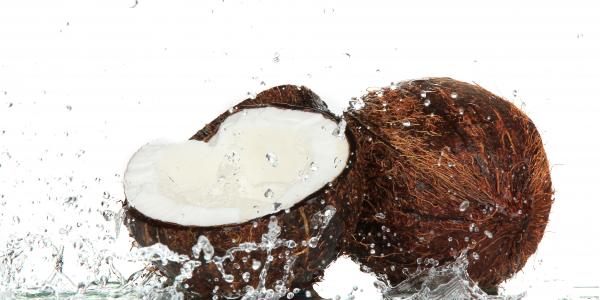 Ever since man – and woman – were first cast away on a desert island, beauty-hunters have known about the powers of the coconut. Split one of these strange-looking fruits open, and it’s an instant, whisk-you-to-a-paradise-beach experience, seducing with the lush sweetness of its flesh and milk. But that’s not all: for thousands of years, the coconut has been part of tropical beauty rituals: a hair re-glosser, skin nourisher – and if Cleopatra had been living closer to a palm-fringed beach, would she not have bathed in coconut milk, rather than the asses’ variety?

More recently, the oil-rich coconut fell from favour. It was too calorific, insisted the fat-phobic waistline-watchers. More: that fattiness was of the saturated variety, explained the nutritionists – which surely had to be bad news for our hearts. (And for the farmers who grew coconuts, too: since the mid-70s, demand for coconut oil fell, so many were forced to abandon their plantations and head for the cities, to make a living.) Meanwhile, in body oils and hair masks, coconut’s unrivalled, skin-compatible richness was often replaced by man-made moisturisers.

But now there’s been a rethink. Coconut is back in favour – and how – with coconut books climbing the bestseller list: The Coconut Diet, by Cherry Calbom with John Calbom, The Coconut Oil Miracle, by Bruce Fife (with another of the same title by Martha Neilson) – and so it goes on. Nutritionists have done a complete volte face about the healthiness of coconut. The thinking? In tropical cultures – such as the Philippines – where coconut is a staple in the diet, it was noticed that even though that diet was high in calories, people were svelte and slender. According to those authors, the unique composition of coconut supercharges our metabolism, not only speeding up weight loss but nourishing skin and hair from within. And there’s more: scientific research now confirms that the fatty acids in coconut oil – of which the most predominant is lauric oil – can heal the body and help prevent disease. (This extraordinary, luscious tropical fruit, it transpires, has antimicrobial properties and may actually fight viruses and kill yeast infections – such as candida albicans – as well as help fight heart disease and diabetes…)

The first that those of us who don’t live in the sun-drenched tropics heard of coconut was 1555 – the year it was first mentioned in print. The name – coconut – actually came from the Spanish and Portuguese word coco, which means ‘monkey face’. Those Spanish and Portuguese explorers saw a resemblance to a monkey’s face in the three indented markings, or ‘eyes’, found at the base of the coconut. On the Nicobar Islands of the Indian Ocean – so recently ravaged by the Asian tsunami – whole coconuts were used as currency for the purchase of goods, right up until the early part of the 20th Century. And small wonder: in many places, coconuts are still regarded as a precious commodity. In Sanskrit, the coconut palm is known as kalpa vriksha, meaning ‘tree which gives all that is necessary for living…’ In India, coconuts from this ‘tree of life’ are dispensed by priests to women longing to conceive.

But what women also long for, of course, is beauty. We dream of sensual, touchable skin and sleek, glossy hair. We want all-over radiance. And for that, we are once again turning to the coconut… Antioxidants have become a beauty buzzword, so you’ll be eager to know that they abound in coconut oil. Our faces and bodies are perfectly designed to drink the free-radical fighting goodness in coconut, with its skin-compatible structure, which leaves skin so velvety-smooth and sensual to the touch. Coconut oil even works to help combat acne and promote healing – something that anyone who’s anxious about spots (and usually wary of applying oil to the skin) may have trouble accepting, till they see their blemishes fade away before their eyes. Wherever skin is thirsty, it will drink in coconut’s richness: if heels and feet are cracked, simply massage coconut oil into them before bedtime, then cover with a pair of clean socks. You’ll notice the difference in just a few nights. Ditto, repair damaged, dry hands the same way – using coconut oil and an old pair of white cotton gloves. Slather warm coconut oil on as a hair treatment – just as the Tagai women of the Phillipines do – for a high-gloss shine: work from scalp to tips, then shampoo out; hair will be less frizzy and flyaway, more gleaming and gorgeous. (In parts of Asia, young girls say their grandmothers still wash their hair with coconut milk – using thick milk for washing, lighter milk from a younger coconut for conditioning and rinsing…) When I was suffering from some kind of hideous allergic reaction last year which resulted in about a hundred mouth ulcers all at once, I swished coconut oil round my mouth for 15 minutes at a time (it’s called ‘pulling’), and gained instant relief. The ulcers cleared up astonishingly quickly.

The key, when it comes to shopping for coconut oil for any purpose: seek out pressed, not refined coconut oil, so that it is free from solvents. Better still, look for an organic version… Just remember: when it’s cold, coconut oil solidifies. But rub it between your palms and it starts to melt, irresistibly…

Not surprisingly, then, we find coconut widely used in tropical spa treatments. Travel to The Oberoi, Mauritius, and during the Paillasson (Creole for coconut husk) Indulgence, you can lie back and be scrubbed with coconut husked, before warm coconut oil is massaged into body and scalp. Bali’s Lila Ulangunan Spa, at Puri Wulundari, will gently slough your skin to smoothness with a coconut scrub. And at the Renui Day Spa, in California, the 80-minute Island Castaway experience includes the pouring of warm coconut milk over the body…

And should you ever find yourself stranded on a desert island? If you’ve packed a jar of coconut oil, all your beauty prayers will be answered. One of the botanical world’s true beauty miracles, it makes the perfect top-to-toe moisturiser – and will keep the frizzies at bay, ensuring sleek, shiny hair. At worst? Break open a coconut and plunder its beauty bounty. Remember: South Sea islanders are renowned for their long, glossy hair (and sun-kissed skin) – despite the fiercely drying effects of the tropical sun. So by the time you’re rescued, you’ll be more gorgeous than before.

Sometimes, Nature really does have all the answers…

If hair has split ends, is brittle or otherwise out of condition, use a super-charged pre-shampooing treatment regularly to put back the gloss and shine. (Once a week is ideal.) To make this up, chop the rosemary herb and place in a double boiler (a bain marie) with the chamomile flowers and the oil and heat for 30 minutes. Remove from heat, allow to cool and place in a screw-top jar for a week, to infuse the coconut with herbal goodness. Then heat again and strain, to remove the herbs. To use the treatment, scoop the mixture out with your hands and work into scalp and hair; comb through from root to tip, if possible. Wrap the hair in a hot towel for 30 minutes. Then shampoo out the treatment (you’ll probably have to shampoo twice) and condition hair. Your hair will love you for it…

This is a quick breakfast you can drink on the go

Place all the ingredients but ice in a blender and process at high speed until well combined. Add ice after the coconut oil is blended so that it won’t clump. You may use more or less ice, depending on how cold you like a smoothie…